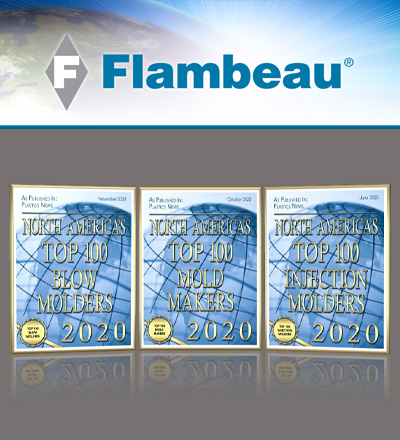 Flambeau Continues to Land on Top in Plastics 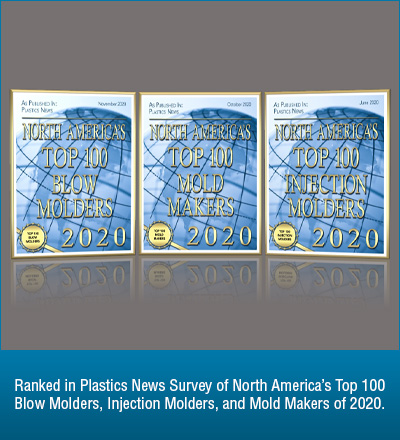 BARABOO, WISCONSIN – Year after year, Flambeau, Inc. is named one of the top plastics manufacturers in North America. Plastics News Magazine’s annual rankings consistently place the Baraboo, Wisconsin-based company in each of the top 100 lists of manufacturing processes Flambeau competes in.

In the 2020 ranking of blow molders, Flambeau came in at #20 with its portion of the list’s combined $4.4 billion in industrial revenue by the listed companies. Flambeau contributed heavily in the list through its sales in the automotive, industrial, molded cases, and medical markets. The company serves a variety of customers and industries with over 100 blow molding machines in its global manufacturing footprint, ranging from one- to forty-pound shot.

In the same year’s ranking of mold makers, Flambeau came in at #58 with its portion of the list’s combined $2.9 billion in tool and mold manufacturing by the listed companies. The company’s Flambeau Technology Center performs tooling and produces multiple mold types for the company’s injection and blow molding operations, in addition to providing CAD design for manufacturing and prototyping and building equipment for automation, secondary operations, and product assembly.

In the ranking of injection molders, Flambeau came in at #68 with its portion of the list’s combined $29.3 billion in revenues by the listed companies. Flambeau contributed heavily in the list’s top markets, including automotive, consumer, industrial, product packaging, and medical. The company performs automated and cleanroom production for a variety of customers and industries with over 160 injection molding machines worldwide, ranging from 24- to 1,760-ton.

Flambeau serves a highly diverse customer base that represents over 40 different four-digit SIC codes and is proud to compete with the largest and best molders and mold makers in North America. Flambeau continues to grow and prosper due to the contributions of more than 1,500 talented and hard-working company members working diligently in production facilities and offices around the world. 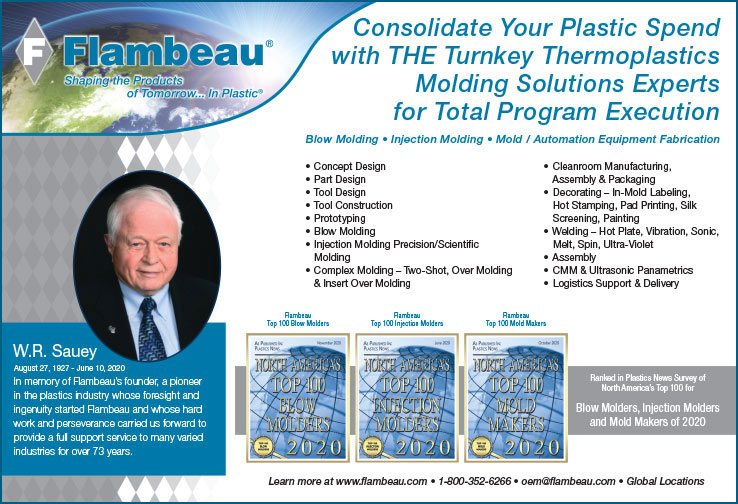 Flambeau, Inc., a Nordic Group company established in 1947, is a thermoplastics manufacturer headquartered in Baraboo, Wisconsin. With certified facilities and sales offices throughout the United States, Mexico, United Kingdom, and in China, Flambeau serves many retail and commercial markets, including contract manufacturing for key sectors of the automotive, industrial, medical, fluids, and packaging industries. For further information on Flambeau's capabilities, please visit www.flambeau.com.
Request a Quote
Affirmative Action

At this time, we are asking you to help us meet our obligations by providing the information listed on the following pages. Please note that the information will be used only in accordance with the provisions of applicable laws, executive orders, and regulations. Providing this information is voluntary and refusal to so will not result in any adverse treatment. The information you provide will be held in strict confidence except that:

Thank you for your cooperation in this important initiative.

Flambeau, Inc. abides by the requirements of federal laws which prohibit discrimination and require affirmative action by covered prime contractors and subcontractors to employ and advance in employment qualified individuals with the following legally protected status: race, color, religion, sex, national origin (per Executive Order 11246), disability (per 41 CFR 60-741.5(a), and protected veterans (per 41 CFR 60-300.5(a).

Section 503 of the Rehabilitation Act of 1973, as amended. For more information about this form or the equal employment obligations of Federal contractors, visit the U.S. Department of Labor’s Office of Federal Contract Compliance Programs (OFCCP) website at www.dol.gov/ofccp.

PUBLIC BURDEN STATEMENT: According to the Paperwork Reduction Act of 1995 no persons are required to respond to a collection of information unless such collection displays a valid OMB control number. This survey should take about 5 minutes to complete.